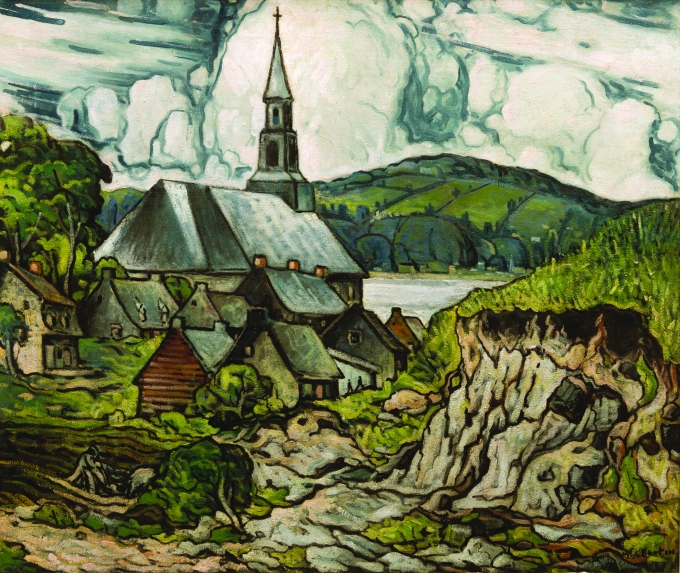 Born in Sainte-Rose, Québec, in 1888, Marc-Aurèle Fortin spent his career trying to capture his province’s landscape in a Canadian fashion. He first studied with Ludger Larose and Edmond Dyonnet before continuing his education at the Art Institute of Chicago with Edward Timmons. It was here that he was inspired by the recent work of the Post-Impressionist and Fauvist artists in France. Upon his return to Montréal in 1914, Fortin painted during the weekends and summertime, taking trips around the province to sketch the local countryside. In 1918 he began using watercolours as well as oil paint. He travelled to England and France in 1920, returning to France for a year in 1934-35. After that trip he began painting directly from the tube with bright colours onto a canvas painted black. Later in his career he became known for Manière noire (black manner) of painting and also did some work in the Manière gris (grey manner) as well. In the late 1930s, Fortin started adding ink, pencils, and pastels to his watercolours to create a stronger aesthetic, more like that of his oil paintings. During the 1950s he experimented with an unusual milk-based medium called casein. Fortin reached the height of his career in 1955. However, complications from declining health due to diabetes, prevented him from painting for some years. In 1960, he resumed painting, until the loss of his sight six years later. Fortin died in 1970. 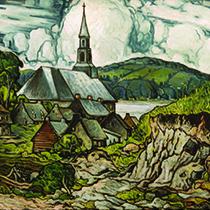