James Wilson Morrice was born in 1865, the third of seven sons in one of Montréal’s most prominent families. His father had made the family fortune in textiles during the American Civil War, and expected each of his sons to follow his footsteps into the family business. Unfortunately Morrice knew from a young age that he was not interested in that fate. He took his first drawing class at the age of 13, and sketched in notebooks throughout his elite private education. When Morrice was about ten years old his father began collecting fine European paintings, which proved to be a great encouragement to the young artist. Despite his wishes to pursue a career in art, Morrice adhered to his father’s wishes and enrolled at the University of Toronto in 1882. Upon graduation, Morrice went on to study law at Osgoode Hall and passed the bar in 1889. During his studies Morrice continued to paint whenever it was possible. When he was 25, his father allowed him to go to the Académie Julian in Paris, having been convinced by Sir William Van Horne that the young artist’s work merited further study. Morrice flourished in Paris and became friends with artists such as Whistler, Matisse, and fellow Canadian, Maurice Cullen. While living in Paris, Morrice travelled throughout Europe, North Africa, and the Caribbean, returning to visit his family in Canada every winter. During the First World War the government commissioned him to paint Canadian troops in France. Morrice developed a technique of painting en plein air upon wooden postcard-sized panels carried within a sketch box. Returning to his studio, he painted in a larger format based on these panels. Morrice is credited with introducing this technique to Canadian artists such as the Group of Seven. He died in 1924. 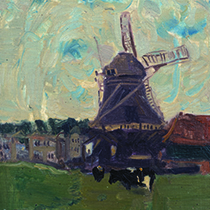 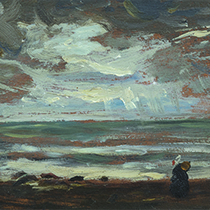 A Beach in Brittany 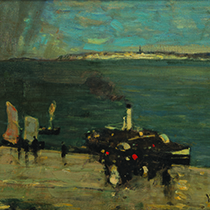 The Ferry to Levis, from Québec City 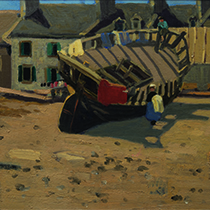 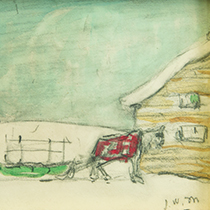