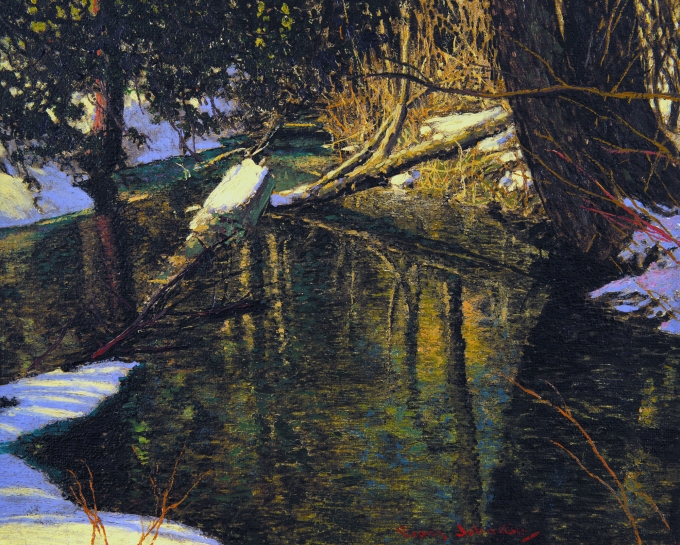 Known both as Frank and Franz, Francis Hans Johnston was born in Toronto, in 1888. He spent his childhood drawing on a small slate, which was a gift from his parents. At the age of 16, he began apprenticing at a variety of design firms and was eventually hired at Grip Limited in 1911. During his formative years Johnston took art classes at the Central Technical School and, later, at the Ontario College of Art. In 1910 he married Florence Jamieson. The next year they moved to Philadelphia, where Franz studied at the Pennsylvania Academy of Fine Art. He continued on to New York a few years later, where he worked for the design firm, Carleton Illustrators Studios. The young couple returned to Toronto in 1915, where Johnston served in the First World War painting members of the Air Force for the Canadian War Memorials project. He travelled north into Ontario’s wilderness to sketch each summer with his friends from the Toronto Arts and Letters Club. Although an original member of the Group of Seven, Frank left Toronto only one year after the Group of Seven’s inaugural exhibition, moving to Winnipeg to become the Principal and Gallery Director at the Winnipeg College of Art. He returned to his home province in 1924 to fill a position as an instructor at the Ontario College of Art. In 1926, Frank began signing his work as “Franz” due to the advice of a numerologist friend from New York, who told him that he would never be successful with his given name. During his life Franz Johnston was appointed to both the Ontario Society of Artists and the Royal Canadian Academy. He died in 1949. 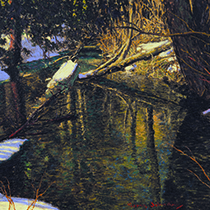