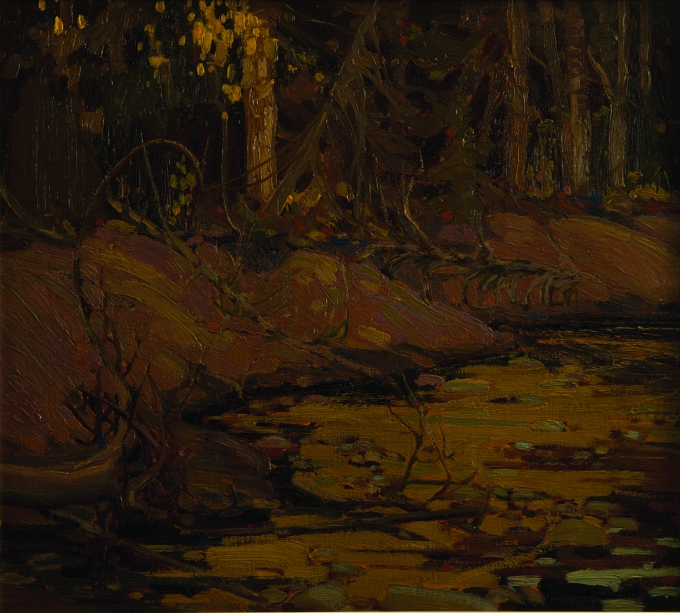 In spite of his remarkably short career Tom Thomson is remembered as one of Canada’s greatest artists. Although he never formally studied painting and only produced about 45 finished canvases, his legacy helped to spark a new movement in Canadian painting. Thomson was born near Claremont, Ontario, in 1877. He apprenticed brieﬂy at a machine shop before enrolling at the Canada Business College for one year, followed by the Acme Business College in Seattle, finally finding work as a photo engraver. Four years later, in 1905, he returned to Ontario and joined a commercial art firm in Toronto. Thomson started at Grip Limited in 1909, where he met the artists who would become central to the success of his work; J.E.H MacDonald, Arthur Lismer, Fred Varley, Frank Carmichael, and Franz Johnson - all future members of the Group of Seven. Thomson completed his first oil sketch in 1907, but it was not until 1911, on a summer trip to Owen Sound, that he began to paint in earnest. In May of 1912, Thomson first visited Algonquin Park, which became a major source of subject matter for his work. Throughout the next few years Thomson sketched during the summers and spent the winters translating those pieces into finished works. In 1914 he left his commercial design job and moved into The Studio to try his hand as a professional painter. His work was first displayed in March of 1913 by The Ontario Society of Artists. Thomson continued to exhibit and develop artistically until his sudden and mysterious death in July of 1917. He was last seen on July 8 taking a canoe out in Algonquin Park, as he had done for many years. His body was found eight days later. 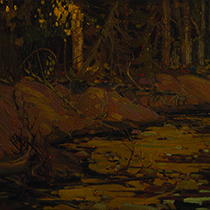 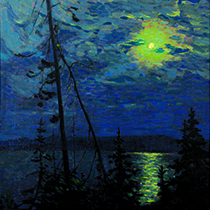