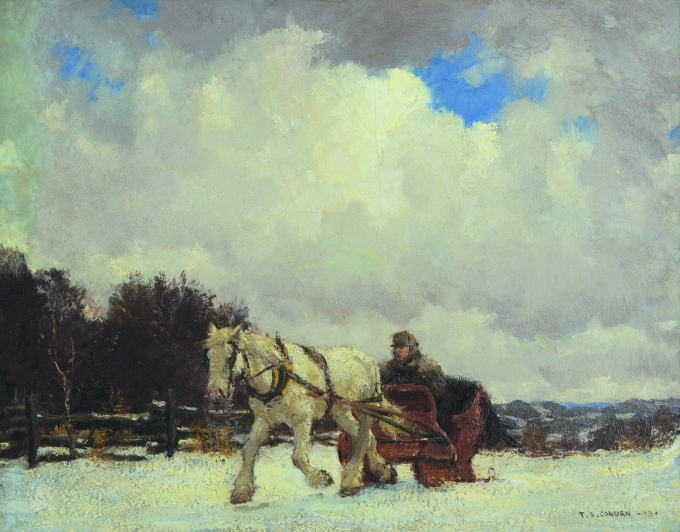 Frederick Simpson Coburn was born in Upper Melbourne, Québec in 1871. Although he spent years living abroad and travelled extensively, his family and roots remained in this small rural community until he passed away in his studio in 1960. Even at a young age, his talent was evident and his parents sent him to study in Montréal at the Council of Arts and Manufacturers School. At 18 he moved to The Carl Hecker School of Art in New York City. Two years later he continued at the Royal Academy of Berlin, returning to Canada at the end of 1892 after the death of his mother. The following spring he began at Paris’ École des Beaux-Arts, where he studied for three years under Jean-Léon Gérôme. Coburn continued travelling between Canada and Europe, studying and painting in a variety of cities including London, Antwerp, and The Hague. While visiting Québec in 1896 the artist met local poet Dr. William Henry Drummond, and was commissioned to illustrate his premier volume: The Habitant and other French Canadian Poems. Following this work Coburn illustrated many manuscripts for Drummond and his New York Publisher G.P. Putnam, which allowed him to support himself and his European studies. He returned to Canada in 1913, due to the impending war and his father’s failing health, and was joined two years later by Malvina Sheepers, an artist he had met in Antwerp who soon became his wife. After the war the couple resumed travelling between Europe and Canada, until Malvina’s sudden death in 1933 due to cancer. Coburn was grief-stricken and only recovered after his introduction to Marguerite Charlotte Lavoie, professional dancer and model known as Carlotta, who quickly became his muse. He took up dancing and slowly stopped painting, although he continued to depict Carlotta in photographs. He is most remembered for his scenes of winter landscapes in Québec, especially those featuring horses. 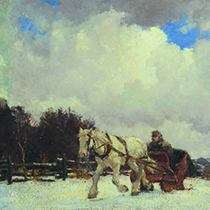