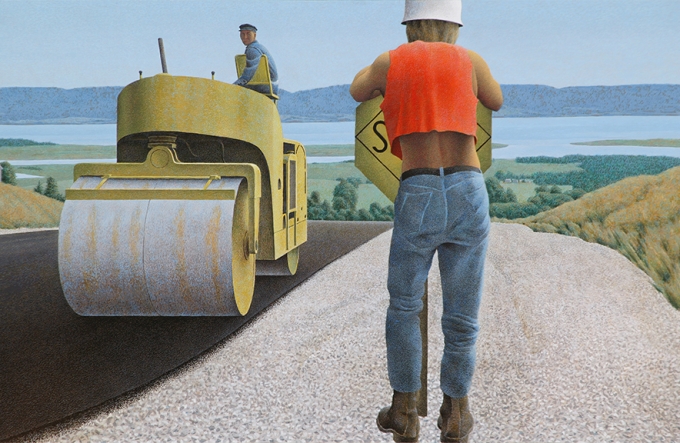 Alex Colville is one of Atlantic Canada’s most celebrated artists. He was born in 1920 in Toronto and moved with his family to Amherst, Nova Scotia, in 1929. He studied art at Mount Allison University under Stanley Royle. On graduating in 1942 he joined the Canadian Army and served in Europe as a member of the War Art program. He taught art and art history at Mount Allison University from 1946 to 1963 before devoting himself full-time to his painting and print-making. In 1973 he moved to Wolfville, Nova Scotia. His first solo exhibition was in 1951 at the New Brunswick Museum (St. John). Since then he has exhibited extensively in Canada and internationally. In 1966 he represented Canada at the 33rd Venice Biennale. He has been exhibited at museums in England, Germany, the Netherlands, Tokyo, Hong Kong, and Beijing. In 1983 the Art Gallery of Ontario organized an international traveling retrospective of his work. The National Gallery of Canada celebrated his 80th birthday with an exhibition in Ottawa.

Alex Colville's work is found in many collections in prominent national and international museums, including the National Gallery of Canada, Musée des beaux-arts de Montréal, Museum of Modern Art (New York), Musée national d'Art Moderne, Centre Georges Pompidou (Paris), Neue Nationalgalerie (Berlin) and the Museum Moderner Kunst Stiftung Ludwig Wien (Vienna). He has received many honours. He was chosen to design a set of coins for Canada's Centennial in 1967 and that year was made an Officer of the Order of Canada and raised to Companion, the highest level of the Order, in 1982. He has been awarded eight honourary degrees and from 1981 to 1991 served as Chancellor of Acadia University. From 1990 to 1993 he was a board member of the National Gallery of Canada. Alex Colville died at Wolfville, in 2013. 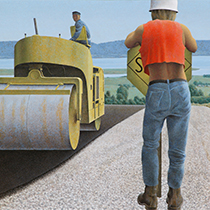