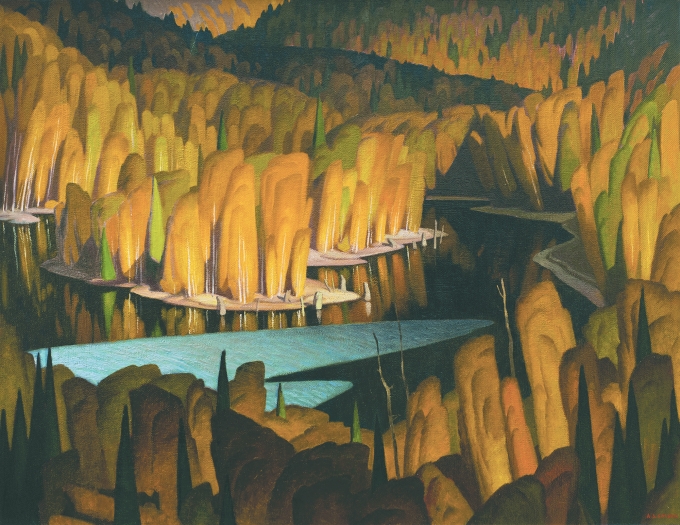 Although not an original member of the Group of Seven, Alfred Joseph Casson joined them in 1926, filling the void left by Franz Johnston’s 1921 departure. He was born in Toronto in 1898, and spent his childhood in Guelph and Hamilton, Ontario. Casson began studying art at the Hamilton Technical School, while also working as an apprentice at a local lithography company. At the age of 17 he returned to Toronto to study under Harry Britton at the Central Technical School. After two years there, Casson began as an apprentice to Frank Carmichael at the commercial art and design ﬁrm of Rous and Mann. He later followed his mentor to the ﬁrm of Sampson-Matthews in 1927. Under Carmichael’s wing, Casson met the other members of the Group of Seven, but unlike many of them he did not leave his career as a commercial artist. He remained at Sampson-Matthews for thirty years, until he retired from the post of Vice-President and Art Director. In 1925, A.J. Casson was one of several artists to co-found the Canadian Society of Painters in Watercolour. His work differs from that of the other Group of Seven members in its depiction of rural scenes, as opposed to the wilderness. As time went on, his emphasis on light and dark became increasingly planar, eventually developing a pattern-like quality reflective of his continued involvement in the commercial art world. Casson died in 1992. 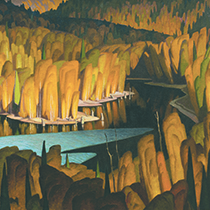 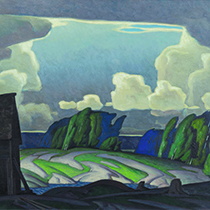