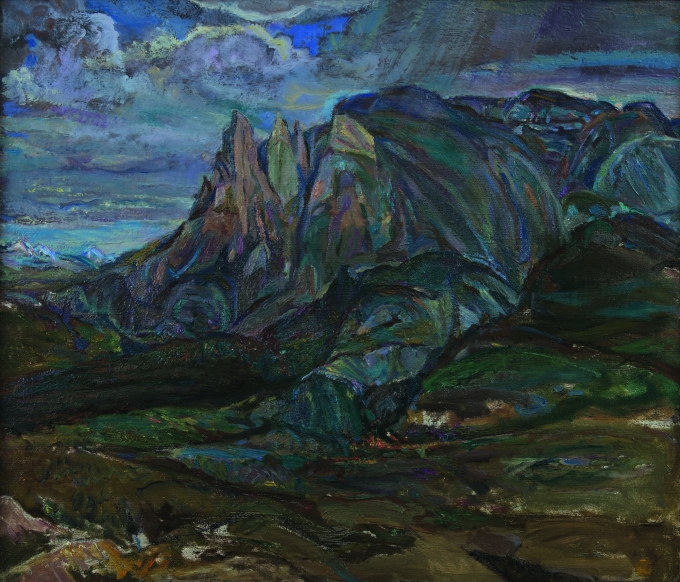 Frederick Horsman Varley, born in 1881, was first introduced to art by his father, Samuel Varley, a lithographer in Sheffield, England. His father often took his young son outside the city to sketch and enrolled him in the Sheffield School of Art at the age of 11. At 19, Varley continued his education at the Académie Royale des Beaux-Arts in Antwerp. He returned to England in 1902 and from 1903 to 1908 settled in London, where he illustrated a variety of novels. Varley married Maud Pinter, in 1910, although neither of their families approved of the match. After settling brieﬂy in Sheffield, the Varleys were encouraged by friend, Arthur Lismer, to move to Canada where he found work at Grip Limited. During the First World War, Varley went to England and France as a war artist. Returning to Canada in 1920, Varley became a member of the newly formed Group of Seven. Although his artistic interests were somewhat different from those of the other artists he did join in painting in Ontario’s wilderness. Varley’s specific passion was for portraiture. He tried to make a living as a portrait artist but was soon compelled to find work as an art instructor; first at the Ontario College of Art in 1925, and then at the Vancouver School of Decorative and Applied Arts, 1926-1936. Varley also spent time living in both Ottawa and Montréal seeking out portrait commissions. In 1944 Varley returned to Toronto where he continued to paint, and at times, teach for the last twenty-five years of his life. In addition to his Canadian landscapes and portraits,  the artist painted scenes of the Arctic and  the Soviet Union, where he visited in 1938 and 1954 respectively. He died in 1969. 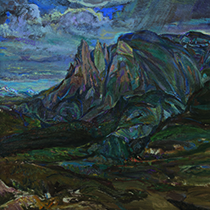 Thunderstorm on the Mountains