Born in Allandale, Ontario in 1892, Holgate’s family moved to Jamaica three years later where his father worked as an engineer. At age five he was sent to Toronto to go to school and in 1901 his family returned from Jamaica, settling in Montréal. Holgate began studying at the Art Association of Montréal in 1910 with Maurice Cullen and William Brymner. In 1912 he travelled to Paris to further his studies, travelling through Russia and Japan, to Victoria before returning to Montréal in 1914. Upon his return Holgate enlisted, serving in the 5th Canadian Division Artillery in France until 1919. He was instrumental in the formation of the Beaver Hall Hill Group in Montréal. After he married and moved to Paris with his wife Frances Rittenhouse, he left the group behind. In Paris, he studied with Adolf Milman, who would become a significant influence for the artist. Holgate quietly bridged the English and French communities within Montréal’s art scene as a member of the Canadian Group of Painters, the Royal Canadian Academy of Arts where he was elected an associate in 1935, and the Pen and Pencil Club. Holgate often travelled with A.Y. Jackson on sketching trips and exhibited with the Group of Seven before they requested he become a member in 1929. His paintings, which depicted the nude in various landscapes, were executed with a sure brush, exceptional composition, muted tones and an individual character. Brieﬂy serving as a war artist in England, Holgate returned to Montréal in 1943 and found that the current art scene was out of step with his own interests, encouraging his move to the Laurentians in 1946. He died in 1977. 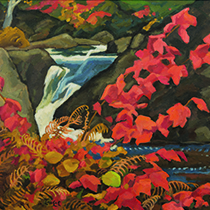