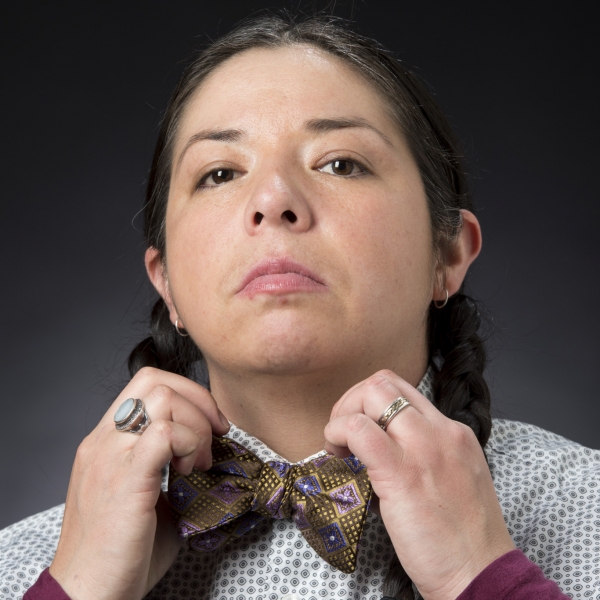 Photo: Rita Taylor courtesy of Banff Centre for the arts

37-year-old, Halifax-based artist awarded Canada’s most prestigious contemporary art prize worth $50,000, sealing her position as one of the country’s most exciting young artists.

The jury for the 2017 Sobey Art Award announced Ursula Johnson as the winner of Canada’s $50,000 prestigious contemporary art prize. She is the fourteenth Canadian artist under 40 to win the distinguished annual award.

The announcement was made during a gala event held Wednesday evening at the Art Museum at the University of Toronto. The 37-year-old artist, who was born in Sydney, Nova Scotia and represents the Atlantic region, was presented with the award by last year’s winner, Jeremy Shaw (West Coast and Yukon).

"I am so grateful for winning this award! I have so much gratitude to have been selected to represent my region and to be in the company of such brilliant artists who are working in amazing ways! This gift of being the winner of the Sobey Art Award means that I will now have the tremendous opportunity to work on a larger scale and expand the reach of my work to a broader community while exploring more diversity in materials and content as well as beginning to create a network of collaborators internationally!"

For the first time in the history of the Sobey Art Award, 2017 saw women and Indigenous artists dominate the shortlist. The five finalists’ extraordinary works both challenged and impressed the jury. The selection committee was chaired by Josée Drouin-Brisebois, Senior Curator of Contemporary Art at the National Gallery of Canada.

“Ursula Johnson was singled out ‎for her strong voice, her generosity and collaborative spirit. Through her work, she redefines traditional materials and re-imagines colonized histories.

Five artists, representing different regions across Canada, are shortlisted for the award, which was increased in 2017 by the Sobey Art Foundation to a total of $110,000 in prize money. $50,000 is awarded to the winner, each of the four finalists receive $10,000, and the longlisted artists win $1,000 each. Works by the five finalists are presented in an exhibition, held this year at the Art Museum of the University of Toronto from 24 October to 9 December 2017.

Rob Sobey, Chair of the Sobey Art Foundation which funds the award, noted:

“On behalf of the Sobey Art Foundation, I would like to personally congratulate.Ursula Johnson on winning the 2017 Award. Every year we are very proud to be able to shine a light on the work of all of the long-listed and short-listed Canadian artists. I want to thank and congratulate every one of them for their enduring contributions to our national culture.”

In 2016, the National Gallery of Canada became the organizing institution for the Sobey Art Award. Building on the success achieved by the award’s founding partner institution, the Art Gallery of Nova Scotia, the new partnership fosters and celebrates excellence in contemporary Canadian art nationally and abroad. For more information about the Sobey Art Award, please visit: https://www.gallery.ca/sobey/en/.

Friday, October 27 at 2:30 p.m., the 2017 Sobey Art Award winner, Ursula Johnson will be at Art Toronto’s center-stage with Mary Lynk- award winning journalist and producer for CBC radio’s IDEAS program- to talk about her work and career. For more information, visit arttoronto.ca.

Ursula Johnson is a performance and installation artist of Mi’kmaw First Nation ancestry. Since graduating from NSCAD in 2006, she has participated in over 30 group shows and 5 solo exhibitions. Johnson has been exploring various mediums including performance art, sculpture, music and printmaking, while utilizing delegated performers as well as collaborative processes in the making of new works. Her performances are often place-based and employ cooperative didactic intervention. In Land Sings, Johnson used topographical terrain mapping to delineate a journey that she translates into a drawn line, and her collaborators use this line to score songs that are performed in a durational manner.

About the Sobey Art Award jury

Each year, a panel of curatorial advisors, consisting of a jury chair and a noted gallery representative from five different regions (the West Coast and the Yukon, the Prairies and the North, Ontario, Québec and the Atlantic Provinces), as well as an international juror, develops a longlist of 25 Canadian artists (five from each region). The panel then chooses its shortlist with a finalist from each region, from which a winner is selected.

The 2017 Sobey Art Award selection committee was chaired by Josée Drouin-Brisebois, Senior Curator of Contemporary Art at the National Gallery of Canada, and comprised six jurors: Sarah Fillmore, Chief Curator at the Art Gallery of Nova Scotia (Atlantic); Claude Bélanger, General and Artistic Director, Manif d’art de Québec (Québec); Sarah Robayo Sheridan, Curator of the Art Museum at the University of Toronto (Ontario); Jenifer Papararo, Executive Director at the Plug In Institute of Contemporary Art (Prairies and the North); and Reid Shier, Director and Curator of the Presentation House Gallery (West Coast and the Yukon), as well as distinguished international juror, Adam Budak, Chief Curator of Collections and Exhibitions at the National Gallery in Prague, Czech Republic.

For jury statements on each shortlisted artist, please visit: https://www.gallery.ca/sobey/en/shortlist.htm.

About the Sobey Art Award

The 2017 Sobey Art Award is jointly administered by the National Gallery of Canada and the Sobey Art Foundation. Since it was created in 2001, the Sobey Art Award has had an undeniable impact on the careers of young Canadian contemporary artists and the award and its attendant publicity have also boosted awareness of contemporary art in Canada and further afield. Considered one of the most prestigious contemporary art prizes in Canada, it is presented annually to a Canadian artist under 40 who has exhibited in a public or private gallery in the 18 months prior to nomination. Originally conceived by Donald R. Sobey, then-Chairman of both the Sobey Art Foundation and the National Gallery of Canada Board of Trustees, it grants a total of $110,000 in prize money from the Sobey Art Foundation. Since the first award in 2002, it has highlighted the work of over 350 artists, with winners such as Abbas Akhavan, David Altmejd, Brian Jungen, Nadia Myre and Annie Pootoogook, among others.

About the Sobey Art Foundation

With a mandate to carry on the work of entrepreneur and business leader, the late Frank H. Sobey, the Sobey Art Foundation was established in 1981 to collect and preserve

representative examples of 19th- and 20th-century Canadian art. The Foundation has since broadened its scope to support contemporary Canadian art through the Sobey Art Award. In one of the finest private collections of its kind, the Sobey Art Foundation has assembled outstanding examples from Canadian masters such as Cornelius Krieghoff, Tom Thomson and J.E.H. MacDonald. The collection is housed at Crombie House, the former home of Frank Sobey and his wife Irene, in Pictou County, Nova Scotia, and is open to the public, free-of-charge.

About the National Gallery of Canada

The National Gallery of Canada is home to the most important collections of historical and contemporary Canadian art. The Gallery also maintains Canada’s premier collection of European Art from the 14th to the 21st centuries, as well as important works of American, Asian and Indigenous Art and renowned international collections of prints, drawings and photographs. In 2015, the National Gallery of Canada established the Canadian Photography Institute, a global multidisciplinary research centre dedicated to the history, evolution and future of photography. Created in 1880, the National Gallery of Canada has played a key role in Canadian culture for well over a century. Among its principal missions is to increase access to excellent works of art for all Canadians. For more information, visit gallery.ca and follow us on Twitter @NatGalleryCan

For all media enquiries, including high-res images and interview requests, please contact: